Image: The Gordon Riots (1896), by Charles Green  (1840–1898). Signed with initials and dated 1896, inscribed on label verso, watercolour heightened with white. Exhibited: Royal Institute of Painters in Watercolours, 'Sketch Exhibition' 1896, No. 1.

It is June 1780, and for seven days London is in the grip of a mob; the anti-catholic Gordon Riots.

Thornleigh Hall, seat of the Earl of Sussex, dominates its surroundings. Its heir is missing, and the once vigorous family is reduced to a cripple, his whore and his alcoholic second son, but its power endures.

Impulsive Harriet Westerman has felt the Hall's menace long before she happens upon a dead man bearing the Thornleigh arms. The grim discovery cries out for justice, and she persuades reclusive anatomist Gabriel Crowther to her cause, much against his better judgement; he knows a dark path lies before those who stray from society's expectations.

That same day, Alexander Adams is killed in a London music shop, leaving his young children orphaned. His death will lead back to Sussex, and an explosive secret that has already destroyed one family and threatens many others.

Reviewed by The New York Times

"Four years ago, Imogen Robertson submitted the first thousand words of a historical thriller to The Daily Telegraph’s Novel in a Year competition. Her opening, one of five winners, was appealing but not sensational. It moved swiftly from a couple of children lying in bed, listening as their father welcomes some visiting musicians downstairs, to a reclusive anatomist receiving news that a body has been found nearby, and back again to the children, eavesdropping on a conversation between their parents. A date and various details — a violoncello, a maid, the anatomist’s isolation from county society — established the setting as late-18th-century England.

Now comes the complete novel. It isn’t often that one gets to compare versions of an author’s work and see how it has moved on: in this case, the early promise is fulfilled. The order of the opening scenes in Instruments of Darkness has been shifted, putting the discovery of the body first, which is always a good thing. (Kingsley Amis once said he wanted only to read books that begin: “A shot rang out.”). The dialogue is more expansive. The parents are reduced to one widower. All this is a sign of Robertson’s engagement with her material, as is her decision to move the action to the month of June in 1780, when for seven days London was in the grip of a mob. American readers will also appreciate certain flashbacks to the days leading up to the Battle of Lexington."

What are people saying about Instruments of Darkness?

An intricate historical page-turner about a forbidding country estate and the unlikely forensic duo who set out to uncover its deadly secrets. Instruments of Darkness combines the brooding atmosphere of Anne Perry with the complex, compelling detail of Tess Gerritsen, moving from drawing room to dissecting room, from coffee house to country inn. Mrs. Westerman and Mr. Crowther are both razor-sharp minds and their personalities breathe spirit into this gripping historical mystery."

Every so often I encounter a book that makes me think with envy: 'How I wish I could have written this story!' Instruments of Darkness is just that book — poetic, enchanting, and chillingly memorable.

Imogen Robertson is an exquisite writer, and this is an extraordinary novel."

the bestselling author of

Shades of Jane Eyre meets Sherlock Holmes, circa 1776: two murders near a country manor in West Sussex; a Lord accused; and insanity, fire, orphans. Attempting to solve the mystery are an early forensic doctor, Gabriel Crowther, and his neighbor, Mrs. Westerman, the unconventional mistress of Caveley Park. This is the first in what I hope will be a long series featuring two fabulously appealing detectives."

A large country estate; an ancient and powerful aristocratic family; a dangerous hidden secret; a mysterious anatomist; a feisty amateur female detective and the brutal murder of a stranger. Really, what more could you want from a novel? Well, how about a link to the American revolutionary war and London in riotous meltdown? It's all here in glorious abundance in this rich and lustrous historical crime novel, Instruments of Darkness, the debut work of the ludicrously talented Imogen Robertson"

Guide for discussion and reading groups.

A note from the author

While I was still working in TV, I found I was reading more and more non-fiction about the 18th century and developing a growing fascination with the period. It is strange and  familiar, a strange mix of brutality and civility, and a time of accelerating change. As I read works like The Wickedest Age by Alan Lloyd and A Gentleman’s Daughter by Amanda Vickery, the image of a killing in the woods flashed into my mind. Who was this stranger supposed to be meeting? Who did he kill? And who would find out the truth? Next thing I knew, Crowther was being woken by his maid bringing him news of the strange gentlewoman in the hallway who said she had just discovered a body.

Articles about Instruments of Darkness

Here are a selection of articles, blogs, and resources about Instruments of Darkness and taken from the news page. 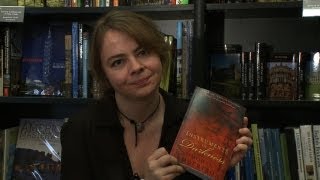 Imogen in conversation about Instruments of Darkness

This article was written by Toby Clements, for the Telegraph. http://www.telegraph.co.uk/culture/books/5444825/Imogen-Robertson.html One...